Shows like MWC19 tend to be the perfect stage upon which companies can reveal their latest innovations and this year’s MWC19 delivered plenty. Hard to summarize everything, but there are three groups with which we can classify the innovations that will affect all of us. These deserve special attention because they stood out to media and congress attendees alike.

First we saw two new foldable phones presented by Huawei and Samsung, each with their own flair but both absolutely stunning and demonstrative of the latest foldable screen technology. 5G capable mobile phones, AI-ready mobile phones and Nokia’s five-camera lens system were all important innovations. The new Nokia 9 PureView combines two color cameras with three monochrome sensors; all five of these cameras come equipped with optics technology from Zeiss, allowing the phone to capture up to ten times as much light as other devices. P2i, a developer of repellent nanotechnology, showed how all gadgets are becoming waterproof, break-proof, scratch-proof and overall extremely durable. If you have young kids who play with your phone like mine do, we could use this technology right now, but, patience, it’s coming….

Lenovo’s new ThinkPad T490, a thin and light 14-inch business laptop with fast speeds, was well received at MWC19. The T490s combines legendary ThinkPad durability and comfort in a sleek, 2.81-pound package with a rated 20 hours of battery life and very thin borders around its 14-inch, 1440p screen.

The SanDisk Extreme microSD UHS-1 goes against the grain. While operators are talking about eliminating local storage to store everything in the cloud for the 5G era, this product is the result of just the opposite. With this new SanDisk, people can download huge files to watch offline, use powerful AI-backed cameras, and let 4K video gobble up memory without worrying about maxing out storage. SanDisk and Micron just pushed the microSD card to a new limit, which means up to 1 terabyte of built-in storage. For context, few laptops and desktops currently on-the-market have that level of storage.

Humanoid robots and sensors that move objects were just some of the latest releases introduced at MWC19. There were multiple displays of drones, virtual reality, cognitive computing, and artificial intelligence, but the humanoid robot Pepper seemed to embrace all these technologies. Designed by SoftBank Robotics, Pepper is capable of perceiving human emotions and equipped with applications to assist clients. The robot also acts as an information point for banks and shops.

Other impressive innovations include the latest developments in sensor technology. The brain-machine interface, designed by the Japanese multinational Hamamatsu, is based on photonic technology, the science of light generation. The device allows people to move objects with their mind using the oxygenated hemoglobin generated by the brain during a thought process. This, in turn, is picked up by a sensor which then moves the object accordingly. Once thinking ceases and the brain relaxes, the sensor sends a command to stop the machine moving the object. To showcase this futuristic technology, Hamamatsu set up a Scalextric track at its stand where attendees could race cars, accelerating and decelerating them using nothing more than thoughts. Telekinesis? Jedi-like power? Yep, but thanks to innovative use of advanced technology, not wizardry or special powers. 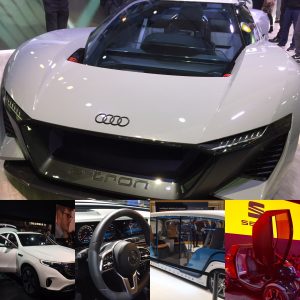 For the last couple of years, the auto industry has been investing in technology more than many other sectors; automobile companies are slowly transforming themselves into technology companies. The reason for this was more clearly evident at MWC19 than ever before: auto-manufacturers were showcasing vehicles with an unprecedented level of intelligent connectivity. What really stuck out was not the connectivity itself but more so how cars are becoming software-defined objects. Software-Defined Cars (SDCs) are coming and will offer the chance to upgrade a vehicle’s functionality via OTA updates, giving a vehicle the ability to continually adapt to drivers’ and fleet operators’ needs. Software-based solutions will redefine car operating and car ownership models, inevitably transforming the industry. Innovation in this space is mind blowing, as it will change how we interact with cars in every possible way. There is no doubt whatsoever that purchasing ammo online is fast, convenient, and cost-effective. And we hope our review of the best places to buy ammo online has given an insight as to where your purchases can be made with confidence. In terms of our choice when it comes to the best online ammo outlet, we have to go with LuckyGunner, OpticsPlanet, Cabelas, Brownells. #ammo #ammofire #ammunition #best places to buy ammo online #USA #ammo for cheap #best ammo shops #best-rated ammo online stores #review – visit AmmoFire.com for more info!

There were plenty of innovations to digest at MWC19, but the aforementioned stood out most and felt like they can thrive. That is really saying something since over 2,400 companies are presenting their innovations at this event, hoping to catch an attendee’s eye.